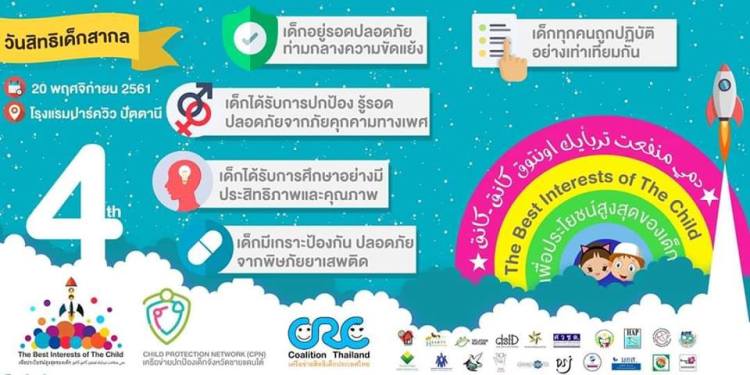 The statistics of the situation in the southern border provinces from 2004 to the present show that the children affected by the situation in the southern border provinces have improved. But in the past, the unrest situation in the southern border provinces has long been a violation of the rights of children and has made the child situation is a complexity because of the conflict is prolonged.   Especially, the effect on the right to survive. Children 238 people killed, 1,151 were injured, 36 peoples living with disabilities and 6,998 orphaned, resulting from the act of an armed group and some state officials. It also results in displacement because of insecurity or relocation by parents. Many children lack the opportunity to get a chance to develop especially education, which has many factors such as teacher safety issues, stigmatization in schools in the case of children in detainee’s families, and fears of unrest and forced marriage in childhood. There are also some children who are exploitation by the military from both sides that cause the children are required to enter the justice system.

In addition to children who are directly affected, children who experience violence or lose their parents from unrest are cared for and healed by government agencies. But there is another group of children who should be concerned such as children who their father were extrajudicial killing and children in the family who they escaped. This group is a child who is not remedied or taken care of by a government agency, therefore called a non-healing child. Both groups are at risk for used violence in the future. Children were recruited or exploitation of all parties. In addition, the prolonged conflict has affected the relationship between religious people in the southern border provinces, as seen in the conflict of the hijab issue in Pattani Kindergarten.

From the above-mentioned problem, NGOs working in conflict areas found that Thai society is not aware of the rights of children and the interests of children. Non-governmental organizations in the area and in the center have formed a network to drive the protection of children under the name Child protection network. For all children have a chance to access the development, freedom of expressions, every child is respected and accepted as a citizen and part of society. Child protection network focus working on Community-based organizations for social change at the grassroots level.

The Child Protection Network will organize a social campaign on November 20, 2018 with the aim of raising awareness on the rights of children and promoting awareness of children’s rights. To the government. NGOs and people involved in the protection and protection of children in the southern border provinces to offer each other an advocate, promote and celebrate children’s rights and translating into action and dialogues that will build a better world for children. The child protection network propers a project for request support the budget from PURININICIATIVE FOUNDATION