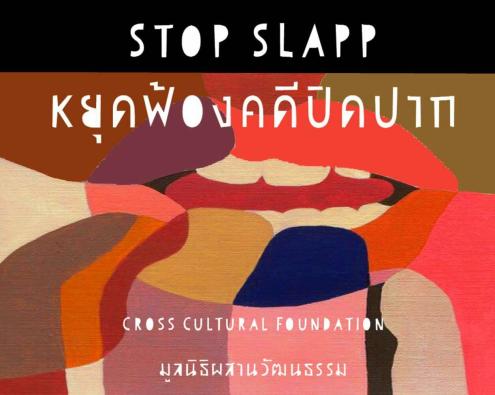 For immediate release on 23 October 2018

On 2 August 2018, the Office of Attorney General has prosecuted Mr. Samak Donnapee , former Director of National Park Office and Mr. Wuth Boonlert, aka ‘Ajahn Wuth’, an independent expert on ethnic Karens in an alleged libel case with the Min Buri Provincial Court, as the Black Case no. Criminal 6246/2561.

On 22 October 2018, a preliminary hearing was conducted between the defendants and the injured party, Mr. Chaiwat Limlikhitaksorn. The latter has hired a personal attorney and asked to become a co-plaintiff in this case with the public prosecutors. In his motion, he also demands two million baht for damages claim and the motion has been granted by the Court.

Two defendants pleaded not guilty to the charge claiming they had done nothing wrong and pledged to defense their innocent to the end. The message posted and the post shared by them through social media (Facebook) states that “Chai Rajapruk Ranch is located in a National park as indicated by the 30 June 1998 cabinet resolution covering the area of 100 rais. A complaint has been lodged to the Royal Forest Department since 2008 and an investigation has been ongoing. Of late, on 24 June 2016, RFD’s Director General, Mr. Chalit Surassawadi, has issued a letter reiterating that Chai Rajapruk Ranch covering the area of around 100 rais is located in the Pah Yang Nam Klad Nua and Pah Yang Nam Klad Tai National Forest Reserves in Song Pi Nong Sub-district, Nong Ya Plong District, Phetchaburi. This can be attested to by a survey per the 30 June 1998 cabinet resolution. It indicates that Mr. Pairote Limlikhitaksorn is the owner of 73 rais of land (coordinate 47P057298E1418060 N(DATUMWGS84) and the RFD is required to reclaim the land. Still, the RFD’s Director General has failed to perform his duty and to issue any order as required by applicable laws and regulations. His failure to act also constitutes a breach to the NCPO Order no. 64/2557’s Article 3 which instructs all concerned agencies to ramp up their effort to reclaim and restore the encroached and deteriorated forest areas with meaningful collaboration from all concerned agencies, civic sector and community-based organizations in order to bring to justice those who have committed the offence per Article 4”. “Any government officials found to have been negligent of their duties or complicit with the commission of the aforementioned offence shall be strictly and promptly brought to justice and to face disciplinary action. ” I therefore urge the Permanent Secretary of the Ministry of Natural Resources and the Environment to act in compliance with the NCPO Order no. 64/2557 against the RFD’s Director General and others as soon as possible.” Both defendants maintain that the statement has been made in good faith and is a fair criticism of a person or anything. And it is a proper act that can be committed by any person to serve public interest. As a member of the public, they urge all concerned agencies and officials to investigate and take action if it can be established that Chai Rajapruk Ranch is unlawfully located inside a Kaengkachan National Park.

During the next hearing, both parties shall have a chance to review their evidence. The defendant attorney pleaded to the Court that given that both defendants planned to present a number of documentary evidence in possession of third parties. He asked the Court to postpone the review of evidence to a later date to allow both defendants to fully exercise their right to defense and for the interest of justice. Therefore, the Court has rescheduled the next hearing to 28 January 2018 from 1.30pm onward.

Ms. Pornpen Khongkachonkiet, Director of the Cross-Cultural Foundation (CrCf) which has offered legal representation and assistance to Mr. Wuth Boonlert as requested said that “Mr. Chaiwat Limlikhitaksorn has pressed charges against the defendants even though the post published by both of them did not mention Mr. Chaiwat by his name. Previously, in a letter for leniency, Mr. Wuth Boonlert has informed the public prosecutors in charge of this case that he did not post the allegedly offensive statement and there is no evidence to prove that he was the person who has spread the message on that particular day and time. He did not input into a computer system any statement defamatory to Mr. Chaiwat. The post that he shared was simply a news report about Chai Rajapruk Ranch and it had been widely shared.  It is likely that this lawsuit is an attempt to harass and an abuse of judicial right against Mr. Wuth Boonlert”

“Mr. Wuth Boonlert is an independent expert on ethnic Karens and works as part of the Karen Network for Culture and the Environment. Based in Suan Phunk District, Ratchaburi, he has been part of an alliance campaigning against the violation of human rights of ethnic Karens who have been living in the Kaeng Krachan National Park. He has been part of the team to campaign until the deceased Grandpa Ko-i Mimi was served with justice posthumously. In addition, in 2016, the Karen Network for Culture and the Environment was recognized by the Office of National Human Rights Commission as an organization working to protect community rights” said Ms. Pornpen.

For more information about this case, please see https://voicefromthais.wordpress.com/?s=วุฒิ