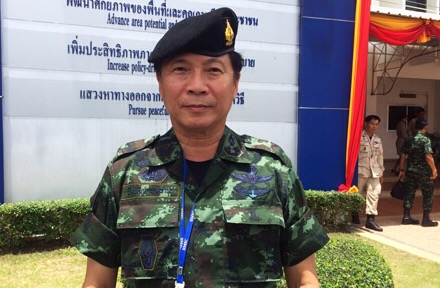 Among the top brasses in the list of the appointment of Royal Thai Army this year, one of the most controversial names is not the new Commander in Chief, Gen ChalermchaiSitthisat aka “Big Jeab since he has been expected to take the post

The most striking names are two military men with the same last name “”, the same with Gen Theerach Nakwanich, the incumbent Commander in Chief, who is going to retire soon. Both have been appointed to two major posts.

Second, Lt Gen Piyawat Nakwanich, Advisor to the Royal Thai Army, who has been appointed the Fourth Region Commander.

All the lights shine on Lt Gen Piyawat, an alumnus from the military academy, the 18th batch, since being appointed the Fourth Region Commander, he is destined to suppress the simmering insurrection in the Deep South of Thailand.

His background is most glaring. Different from the previous commanders, he has never been in the commanding position of any armed forces unit. Being appointed in this post, he must have quite an “extraordinary qualification”.

Lt Gen Piyawat, aka “Art”, or “Seh Art” as he is known to those close to him was born into a military family as his father and all siblings serve in the army.

A veteran in the Deep South, Lt Gen Piyawat had been involved with the situation there, particularly being in charge of intelligence work. He was once appointed the Director of the Reconciliation Promotion Center, while being a colonel in 2010.

The Reconciliation Promotion Centers were in fact an interrogation and detention center where security related suspects were held for questioning by the military. The largest among them was located in the Ingkayuthboriharn Army Camp, Nong Chik District, Pattani. It functioned as a majorchain of supply of information regarding the structure of the insurrection groups based on the intelligence gathered from the persons deprived of liberty, the information of which plays a pivotally important role in shaping tactical plans in the Deep South.

In 2011, the Reconciliation Promotion Centers were disbanded as a result of controversies involving the death in custody of a suspect and it has been transformed into just an interrogation center. The then Col Piyawat was transferred to take the post of the Chief of Staff of the intelligence unit under the Directorate of Operations, in charge of intelligence work that he was keen on since working in the Deep South.

He was later promoted to the leader of the coordination team between Thailand and Malaysia, the Coordination Center with Neighboring Countries, the Royal Thai Army earning the rank of a Maj Gen. He has returned to the Deep South again being appointed the Director of Intelligence Unit, the Internal Security Operations Command Region 4 Forward. The work suited him best and he has virtually returned to take the charge of the interrogation center which has since then had its name changed to the “Military Intelligence Unit Forward in the Southern Border Provinces”.

Caption: Inside the interrogation center, a sign hung there read “Art Resort” in memory of Lt Gen Piyawat

Just this April, “Seh Art” was promoted to a Lt Gen taking the post of Advisor to the Royal Thai Army and has then risen to become the Fourth Region Commander, just beyond any prediction.

As to the military interrogation and detention center for suspects in security cases, either when it was known as the Reconciliation Promotion Center or the Military Intelligence Unit Forward in the Southern Border Provinces now, its operation has been eliciting concerns from human rights defenders including many NGOs.

In 2010, Mr. Sulaiman Nasae, a suspect in security case, was found dead being hung from the window grille inside his detention cell. The authorities explained that he hung himself to death and the compensation has been disbursed. Still, because of the controversies of the case, the Reconciliation Promotion Center had been ordered disbanded the following year.

Then in 2015, Mr. Abduldayib Dolah, another suspect in security case, was again found dead mysteriously in his detention cell. Now the place in which he was deprived of liberty had its name changed to the Military Intelligence Unit Forward in the Southern Border Provinces. The case is still pending in the Court. His ascension to the post of the Fourth Region Commander has undeniably put Lt Gen Piyawat under spotlight from human rights activists and NGOs, some of whom have been sued by the Internal Security Operations Command Region 4 as well.

As unrest in the Deep South needs to be solved by collective efforts of all sectors and dialogues at all levels to transform the violence into a peaceful situation, it is critically challenging for Lt Gen Piyawat who is now taking the helm of the Fourth Region Commander and destined to suppress the insurrection there.

As to other change in the Fourth Army Region, apart from its new Commander, Lt Gen Piyawat Nakwanich, who is going to replace Lt Gen Wiwat Pathompak, who is going into retirement, Lt Gen Ruangsak Suwannaka, the Commander of the Fourth Army Brigade, would be promoted to the Army Senior Advisor (in the rank of a General).

Ajahn Wanchit Boonprong, a lecturer on national security from Rangsit University, says that the appointment of Lt Gen Piyawat, who has had no experience taking charge of armed forces units as the Fourth Region Commander aims to fix problems plaguing intelligence work in the area according to what had been earlier revealed by Gen Prawit Wongsuwan, the Deputy Prime Minister and Minister of Defence.

“The senior officers in the government and security units were aware of the problems regarding intelligence work in the Deep South since it has given rise to more frequent violent incidences lately. In my opinion, the appointment of Lt Gen Piyawat as the Fourth Region Commander is aimed at fixingthe problems since he has been involved with intelligence work before and is an expert in this field” said Ajahn Wanchit.

2 Lt Gen Piyawat, during his tenure as the Director of the Reconciliation Promotion Center and while giving an interview to Isara News